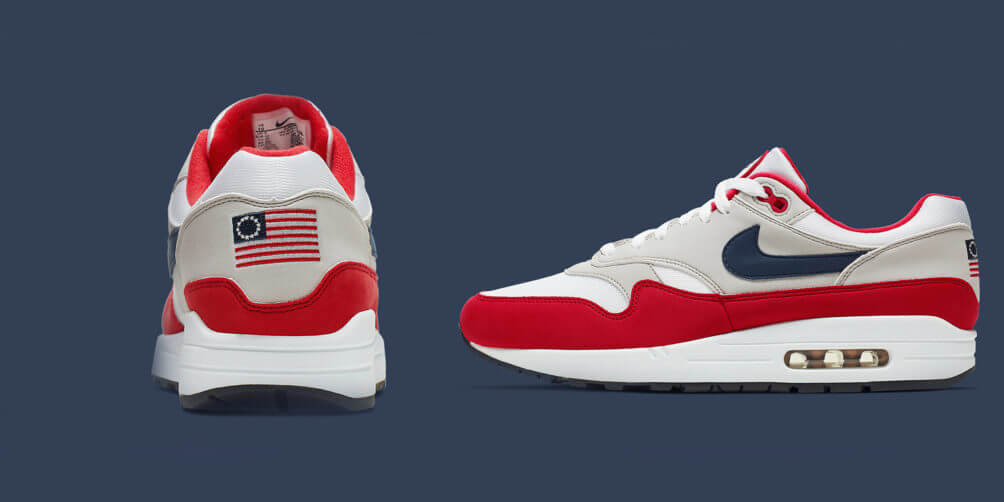 Classic yet controversial, these are the Nike Air Max 1 Quick Strike 4th of July sneakers. A model whose colorway is reminiscent of the OG version of the sneaker, which is only clashed by the blue swoosh.

However, what has become controversial is the flag on the heel of the sneakers, which refers to the original American flag that was sewn by a seamstress named Betsy Ross.

According to CNN, Nike decided to stop distributing the Air Max 1 Quick Strike Fourth of July model based on concerns that it could inadvertently insult and disrespect the national patriotic holiday.

Given the above, one of the few avenues are re-sellers and eBay. Even StockX is silent and you won't find this model on the menu. The price on eBay is currently above $1000.

Nike is canceling a sneaker that featured the „Betsy Ross“ version of the American flag from the late 18th century.

„Nike made the decision to halt distribution of the Air Max 1 Quick Strike Fourth of July based on concerns that it could unintentionally offend and detract from the nation's patriotic holiday,“ Nike said in a statement to CNN Business. „Nike is a company proud of its American heritage.“

The Wall Street Journal reported earlier that Nike (NKE) delivered the sneakers to retailers, but asked stores to return them to Nike after the company received a complaint from former NFL star Colin Kaepernick. The Journal indicated Kaepernick said he and others found the shoe offensive because of its ties to America's era of slavery.

Kaepernick could not be reached for comment Monday evening.

The shoe was set to be released Monday for $140, according to Sneakernews.com. The website included photos of a shoe that featured a version of the American flag with 13 stars organized in a circle and 13 stripes. That version of the flag, according to the Smithsonian, was used in the United States from 1777 to 1795. It is unclear if any of the shoes were sold.

This is the second instance of Nike removing a product in recent days. The company stopped selling some products in China after a fashion designer's support for protests in Hong Kong sparked a social media backlash.

Nike said in a statement at the time that it had decided to remove some of its goods „based on feedback from Chinese consumers.“

In May, according to footwearnews.com, Nike canceled an Air Force 1 sneaker after an indigenous group in Panama objected to its design.

When is Nike’s Air Max Day?

On March 26, 1987, one of the most revolutionary sneaker technology graced the world with its unique aesthetic and insane comfort that made the tech still relevant even un...

This article belongs to a series of articles about the OG colorways of the legendary streetwear sneaker Air Jordan. The first, the pioneer, the legend. The Air Jordan 1 is Mic...

In 1982, a sneaker legend saw the light of day. Nike first introduced a basketball shoe that contained an air bubble in the midsole that made running on the backboard a walk...

Do you want to buy a fresh pair of new Air Jordan 1 or Air Jordan 1 Retro sneakers? But you are not sure about your size? Our size chart will definitely help you. You can find ...

How to lace the Nike Air Force 1?

We all know how stylish the Nike Air Force 1 can get. But we can add more style to this classic silhouette by adding unique lacing setups that instantly wows anyone w...